Pixiv has the option for it's users to submit things in logs which is good when they may want to submit doujins and doodle summaries. There have been some issues lately though about getting the full-sized version with it's not-so-recent update.

Typically, when you get 'master_1200' in the file name, that usually means there is either a higher quality version available, or one flat-out larger in both quality and dimensions.

For example, here. I want to download this image in the actual size, so I will need to do some clicking around. Due to advanced technology, if you are on mobile, it's a bit reversed, and you will see how below.

Open the log. I love this image so I want to save it. If you want the full version, do not save it directly from the log. You will need to open the image separately like so, by clicking this button. Here you will see the image in full. It will either open in a new tab [my case], or in the same browser depending on your computer settings. Notice like in the circle [Oval? I'm no artist. XP] it says 'big'. If it says [long number]_p0 or in this case [long number]_15, with no master_1200, you have been successful. The number after the underscore is just it's sequence in the log. Typically the very first image, the 'cover' once it's opened, is 0. Note: I have an Ugoira tutorial in the works but it's been shelved for now. I need to do some testing and figure out alternative methods and see how this one goes. Ask any questions you might have below and either me or another user who knows how will answer.

On mobile:
It will just be on the opposite side. You will follow the rules as above after that.

I like to help on mobile, since i work from it.
When you like an image and you wanna it without Master, what you need to do is:
1- press on the image that you like. 2- you get a page shows the image, i choose this the Artist name will be above the image on the left. 3- press on the image, and the image will start to show up on the screen wait until the full image shows up , and then press for while on the image (on chrome) it will shows a box with a Five choices, Choose save image. And you got the image in the full size.
Save image is the first choice, mine is writting in Arabic so sorry of you didn't understood it.
and you got a full-sized image without "master_1200" in it's name and the image name will be [numbers]_p0 (that means it is the full size of the image), on Dolphine broswer follow the same steps, but when you press on the image to save it Dolphine will show a box that you can change the image name in it, and it is location.
Hope it is helpful for you guys. ^^
Top

this would've been super useful to me a few months ago, since i kept saving 1200 for quite some time after everyone else had it already figured out.

here's what i use for ugoira
https://chrome.google.com/webstore/deta ... nfo-dialog
there's also a method to search the page code and get the zip, but that seems like too much of a hassle for me

There's a little bug going on for premium users with this today, but I was notified Pixiv was working on it and it only happens once in awhile.

For those interested, this still is the way to get it. I will edit this message when I get notified again its fixed. ;;

So today's lesson is on Tumblr! This is just one way to do it and it's very simple. I touched up on it briefly in a comment but decided to stick it here.

So, I want to download this image by kumafromtaiwan [or 'kuma' on the board']. I want the full version though, and not a resized version done by Tumblr automatically. Here is one way, and there's really not much to it.

Hit 'view image'. Sometimes this brings up the full size, sometimes not. Think of it as the same system Pixiv uses for their master files, 500 and under being master, and 1280 being the full sized.

This image did not open to it's true resolution. I will manipulate the URL by removing 500, and replacing it 1280. Ta-da!

There are other ways, like viewing page information and grabbing it from there, which I will add momentarily.

I thought this update was just a Premium thing [I got it for reasons that have nothing to do with uploading, but rather convience to see who's looking in and out and stuff] but my HibiRai doodle account is the same and Fawn confirmed in the comment section it's like that for her, too so. I remember they played around with the layout before but it changed back to the one we've known for years. They had a grid feature but they took it away for now. >:[ Whatever. So here's how to get the images and not master_1200 now. It's a lot more simple, actually.
Sorry for the log selection; Minthama is a favorite of mine despite them deleting all the good logs. So I just went to their Pixiv knowing a log was there. <<; I hope this is a beta release and it comes back patched and with the grid feature. I liked seeing what was in the log with a small thumbnail before getting a close up of stuff I didn't want to see, hahaha. It's simple, good if you're on a light browser, and all that.

Step 1:
Obviously click on the log. When it's pulled up, look down to the bottom of the cover drawing. Hit 'See all'. 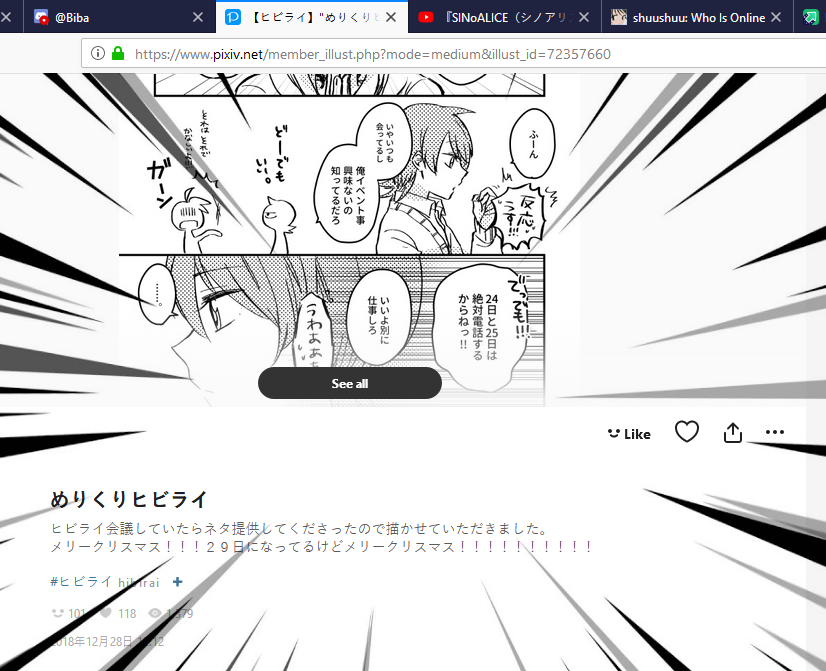 So now your log is all out for you like it normally would be, but this time there are no additional tabs or buttons like before.

Step 2:
'K so now that your stuff is opened, it will look kind of like this. There will be bold ^ toggle [on my end at least] and your page numbers will be here. 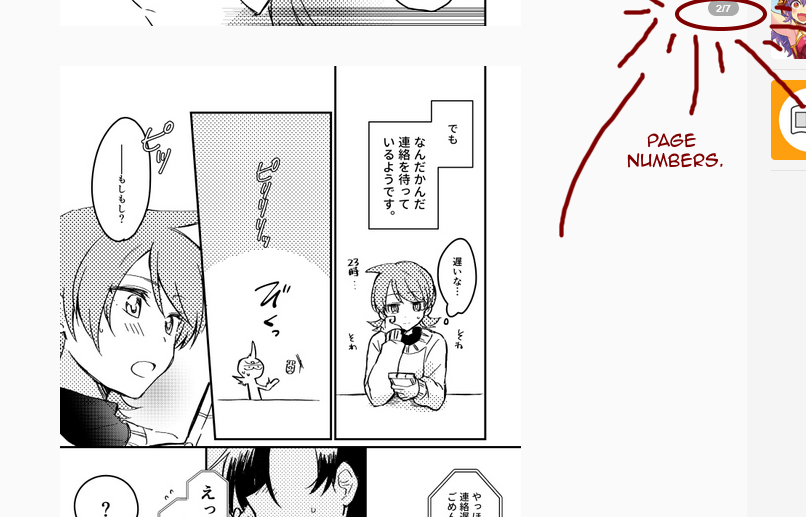 For me anyways, a mangifying glass with a + symbol on them appears over an image when I scroll over it. Anyways, regardless of what it is for you, just click on the image you want. 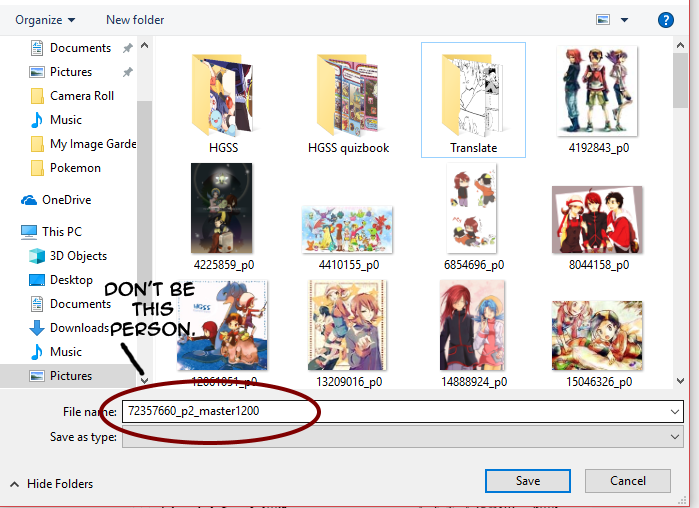 Don't save each picture like this. If it has master_1200 in the filename, you grabbed a lower quality and/or smaller version. This picture is the same res, but has artifacts. The actual image is a PNG. In most cases, it's bigger. Here it's quality. 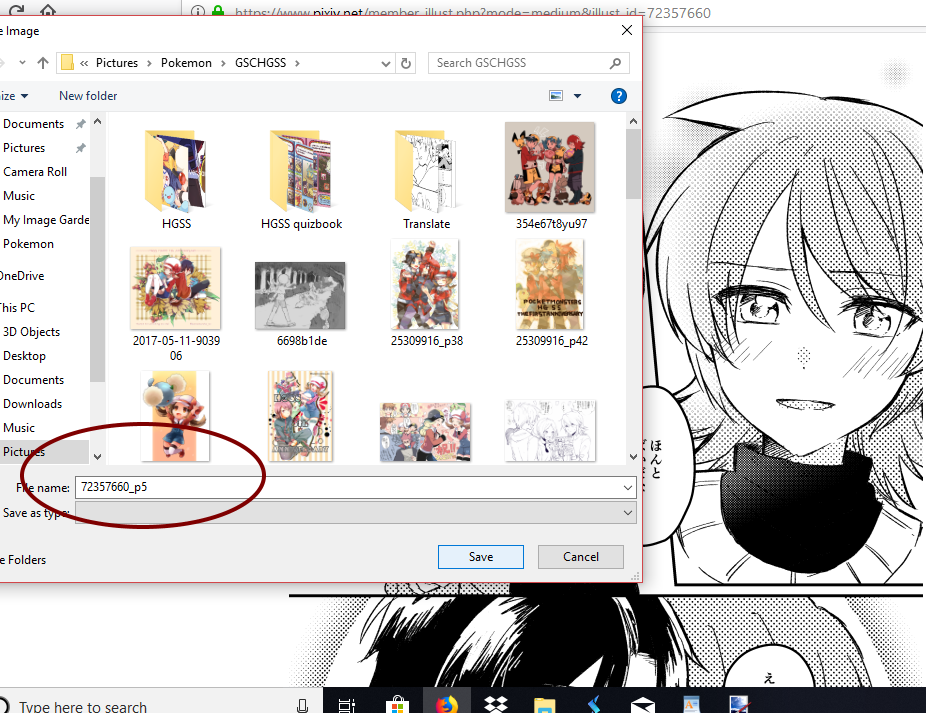 I opened the image I wanted to save [no really, I was saving it for Tumblr as I was making a tutorial]. If I try to save it from here, it's the full res. You cna also use the 'view image' option AT THIS STEP [otherwise you open master_1200] but you don't really need to.

Side note: I've noticed it won't let me save the picture right after opening it. There is usually a second. I'll consider I have satelliete wifi but the purpose for the update according to Pixiv was to be easier on Light browsers and data. So there's that. Just wait a second if the 'save image' option doesn't show up at first if you right click.

Instead of clicking a magnifying glass and opening the full image in the same tab, you can also right-click it and choose open in new tab.

I personally find it more convenient, so maybe some users will do as well.
Top

That is convenient, thank-you!