Lily is a sarcastic, joke-loving girl. Upon meeting someone new, her way of trying to make friends is being silly and funny, and it usually works. Although a lover of jokes, she believes making good, considerate jokes is not easy and hates when someone is just an overall idiot and/or jerk. She is very patient when it comes to explaining things, but her emotional often gets in the way, and she loses her temper very fast - this has caused her a few troubles in the past during mod duty, but she's changed since then. She hates having arguments with friends and loved ones. She is a very good listener and tries to help in any way she can, which was basically the main reason she joined E-Shuushuu. She spends most of her time among Shuu members on MSN and watching anime.

Lily's a 22 years old girl with a degree in Portuguese and English languages who works for the government. She's a brazilian citizen, and has English as her second language. She started learning English at the age of 10, and by 13 started writing fanfiction in hopes to improve her writing skills in the language, and at the same time, enjoy writing stories about her favorite characters. She's been a fan of the Japanese culture and anime since she was 5, and even does fansubber work occasionally.

Lily spends most of her time simply surfing on the internet, browsing shuu, MAL, and talking to her friends on MSN. When she is not too lazy, she watches a list of animes that just keeps growing each day. She hates reading manga on the computer, but since college students are eternally broke, that's the option she gets. She loves writing fanfiction, although a whole lot of her stories remain unfinished to this day. She also "works" as a translator from English to Portuguese in a brazilian Fansubber. She loves video games, although she used to play them a lot more in the past; RPG's are her games of choice, and her favorite game of all time is Final Fantasy VII: it even holds a strong emotional value. Although she loves reading, in the past few years the habit hasn't been practiced, only amateur fanfiction writings. She's a big fan of BL, and that is her main genre of writing, reading, and enjoyment in general. She's currently writing stories to her present obsession, the anime Tiger & Bunny. 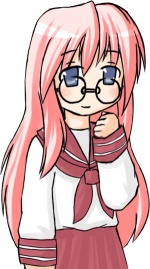 Lily's first appearance in the site held the image of Mai Kawasumi, and didn't stand out at all, posting images and comments only on occasion. Her reputation started to grow when, on April of 2007, she started using the avatar of Miyuki Takara, from the anime Lucky Star. Users started to recognize her by her apparent love for characters with pink hair. The exact date of creating is unclear, but on May 7th of 2007, Lily requested the title of "Pink Moe", the term referring to her beloved pink-haired characters, and it stuck. Lily started getting directly linked to Miyuki, even in personality - the lovable member who tried to help other users and was knowledgeable of a series of different subjects. Upon reaching the rank of moderator, she was known as the Pink Moe Mod, and is known around the community as the "Shuushuu's leader of pink moeness."

Lily's sweet and smart reputation didn't last long. On the 10th of July of 2007, her friend Ran started the E-ChuuChuu ~Hidden Intentions~ series, which portraited her as an evil genius. From them on, users quit seeing her as innocent and sweet, and started becoming afraid of her intentions. On several occasions, Lily has proved to be more than just a nice pink moe and even threatened the surface of her second personality, DevilLily. Up to this day, the personality has not fully surfaced on the board, and for the good of everyone, it should remain that way. It is not known when the "shotacon" fame started, but Lily has ceased to care about it, and has embraced the term, even changing her title to "Koi no Shota Densetsu ♥", a joke with her love for Mikuru Asahina, who she even cosplayed.

Lily joined E-ShuuShuu on the 19 Feb 2007, and her first image was posted on the same day - a Valkyrie Profile image featuring the character Yumei. She didn't post images very often, trying to search for the best ones to try and contribute to the community accordingly. She tried to help the moderators, whom she admired, as best as she could, by reporting reposts and welcoming new users. Her posts count started increasing surprisingly, and due to her Pink Moe reputation, her name was known among the regular members. Because of this, only a few months after her arrival, Lily was promoted to the Moderator Team on 5 Jul 2007.