Emii, previously known as Emii-Chan-Megalover, is an amiable, yet persistent young lady. UNDER CON. 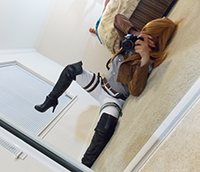 Emii as Petra Ral from Shingeki no Kyojin

Emii, aka Emilia, is a 20 year old girl who is currently attending college. She majors in linguistics, the study of the human language, and minors in communications. She’s aiming to become a translator in the near future. Majority of her time, Emii spends it with her friends and her cat named ‘Caster'

Emii’s hobbies consist of eating, reading, shopping, and admiring 2D men from anime/manga/games. Most of the time, she’s playing otome(visual novel) games, listening to R-18 otome drama CD’s, or prepping for an upcoming anime/game convention since she loves to cosplay. Emii is an avid reader of BL and GL, and even collects doujinshi of it. She also collects anime figurines, anime straps, and anime merchandise. She dreams of one day completing her “Uta no Prince-sama” shrine in hopes of Japan announcing a 1/8th Nanami Haruka statue.

Emii joined on January 10th, 2009. She would’ve registered earlier, but due to a faulty registration error on E-shuushuu, she was unable to. Emii lurked the image board for a year and a half before registering again. In the beginning, Emii uploaded Heart no Kuni no Alice, Katekyo Hitman Reborn!, Vocaloid(Kagamine Rin and Len), and Zaregoto related images. She knew how to spot artist names, but was oblivious to the romanization term, until one day, Yatchen, approached her and taught her how to romanize correctly. Soon after, Thursday began to mentor her. Emii became a member of the tagging team in August 12th, 2011, and was later then appointed to moderator on February 7th, 2015.