Ran is very considerate, yet perverse, in his ways and always does his best to make his friends laugh. His fun-loving personality has gained him many friends both online and off. While he is typically kind towards new members, he has been known to be rather stern when it comes to topics or rules that conflict with his personal views. Ran is the type of person who will help anyone in need, but won't hesitate to voice his opinion to make sure that he gets his way. Such disagreements even led to his temporary retirement from the Moderator Team which lasted no longer than two weeks. While at work, he spends a lot of his time online with his friend on MSN Messenger where his perverse and flirtatious demeanor tend to get him into more trouble than not.

Ran and Hiromi at Drift Atlanta 07

In the real world, Ran is a 23yr. old male that manages an online racing equipment store. He is a former infantryman for the United States Army and currently resides in Canton, Georgia USA with his relatives. Attending college at Kennesaw State University, Ran adjusted his career major from Education to Business Management in hopes of opening his own anime outlet store in the near future somewhere in Northern Georgia. Ran spends most of his free time with his loving girlfriend Hiromi whom he has been dating for two years.

Ran traditionally spends his weekends with his girlfriend Hiromi as it is his only spare time away from work. During these times, they tend to eat out, go see movies, and discuss relationship or religious affairs. In addition to watching anime and reading manga, Ran enjoys working on cars and taking part in automotive motorsports. As a former drifter, Ran has worked on all sorts of vehicles from Mazda MX-5 Roadster's to his current vehicle, a Ford Mustang GT. He is currently not driving in any form of motorsport. Ran also enjoys video games to a large extent, primarily those on the Playstation game consoles. 2-D fighters, RPG's, and racing titles are his standard genres of choice. His recent game addictions have been Grand Theft Auto IV, Resistance: Fall of Man, and the .hack//G.U. series. Physical activites that Ran enjoys are racketball and golf. Sadly, he is not very good at either of them since he hardly plays.

Ran's initial reputation on E-ShuuShuu was one of question as he would tend to push the boundaries on ecchi acceptability for postable images. With a majority of his images being of the loli variety, it was only a matter of time before he would be dubbed with an incriminating user title by other users. On 27 Mar 2007, the term "Lolimancer" was used to describe Ran in relation to his comments on an of image Kagami Aya from Yume Miru Kusuri: A Drug That Makes You Dream.

While the term was initially coined by BlackHeart, the proper definition was later provided by Fuwari who essentially adjusted the definition of Necromancy to fit the new term. Over the period of only a few days, the term was used repeatedly by various members and the title was officially placed. Aside from general use on the E-ShuuShuu imageboard and forums, the title was also carried over into E-ChuuChuu and E-ChuuChuu ~Hidden Intentions~ where it serves as more of a job description rather than just a humorous title.

Lolimancy (Greek; lolimantía) is a form of divination in which the practitioner seeks to summon "lolis" or "little sisters", for multiple reasons from physical fulfillment to companionship. The word lolimancy derives from the Greek words lol-i (loli) and manteía (divination). However, since the Sengoku Jidai (Warring States period), lolimancy has come to be associated more broadly with loli magic and loli-summoning in general, sometimes losing its earlier, more specialized meaning - the forceful application of a transforming any human into a loli using astronomical energy.

In the original E-ChuuChuu, the Lolification Beam was Ran's specialized ability that would be used as a violent beam attack against other members. It was originally depicted as a destructive magical force such as a spell. Later on, the ability would make the jump to E-ChuuChuu ~Hidden Intentions~ where it would serve a different purpose. As opposed to it's original destructive design, the revised beam would be used to transform Ran's opponents into loli or moe versions of themselves. The beam has been used twice in the series so far, having a different effect with each use. In Vols.5-7 of E-ChuuChuu ~Hidden Intentions~ the beam was fired yet redirected back at Ran thus causing his physical appearance to change from Tohsaka Rin to Reisen Udongein Inaba. However, in Vol.40 the beam is seen reverted back to it's original destructive purpose as it was used to defeat his opponent Valea. Due to Ran's mental instability during the events surrouding Vol.40, primarily the death of Smithy, it is speculated that the beam's attributes tend to adjust with the caster. In a recent E-ChuuChuu the Lolification Beam was seen to be replaced with a Lolification Cannon. This change is most likely attributed with Ran's avatar to change to Francesca Lucchini from Strike Witches whom carries a large military rifle. 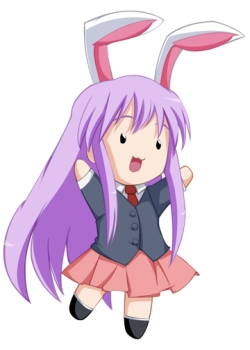 Ran joined Kawaii-Radio on 14 Sep 2005 under the username Ran Kizama. As Kawaii-Radio was providing entertaining music for his workday, his participation on the forums could be considered to be more active than the average user. Aside from participating in general discussions, Ran was the originator and primary poster of the "Cute Random Pics" threads within the General Discussion. The threads spread over five continuations with hundreds of pictures being posted online monthly. Ran remained active at Kawaii-Radio until early 2006 when he made his migration over to E-ShuuShuu. While he still listens to Kawaii-Radio when he's at work, Ran has long-since become an inactive member on their forums.

Ran joined E-ShuuShuu on 27 Feb 2006 under the username Ran Kizama and made his first image post the same day. His initial actions on the imageboard were typical of the regular members with daily activity. When the rules concerning ecchi permissions were eased, Ran was amongst the many members whom quickly took advantage of the situation. Due to this, the laxed rules were quickly done away with and the site returned to it's original standards. A few months later, with the retirement of AnimeJ, Ran was promoted to the Moderator Team along with Fenrir on 30 Oct 2006.